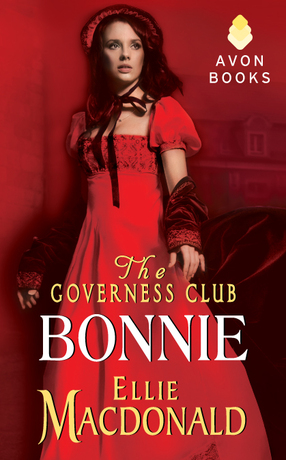 Book #2 of The Governess Club series:

Miss Bonnie Hodges, governess to  the Darrow family, is desperately trying to hold it together. Tragedy has  struck, and she is the sole person left to be strong for the two little boys in  her care. When the new guardian arrives, she hopes that things will get better.  She wasn't expecting her new employer to be the most frustrating, overbearing, and…handsome man she's ever seen.

Sir Stephen Montgomery is utterly distracted. He should be trying to figure out how his two best friends were  killed in a suspicious accident and why the new young viscount seems destined to be the next victim. But he can't concentrate on anything but his growing infatuation with the beautiful, mysterious, and utterly captivating governess.

Together they're doing their best to save the two boys, but will Stephen's feelings for Bonnie get in the way of their search for a killer?

Scroll down for a teaser!

my inspiration (a.k.a who i modeled the characters after)

Bonnie is a dedicated letter writer and it's how Claire stays a part of the story! Read the second letter to Claire.

I have to admit, I am not surprised that Mr. Knightly insisted so strongly on a short engagement. Did he actually show you the special license with the vicar standing right there? And over breakfast? I am gratified to know that you stood firm and insisted on waiting for morning lessons to be completed before any vows were spoken.

I do hope that wedded bliss and the happiness of the recently wed softens your reaction to what I am about to say. I know I promised to come to Ridgestone once the guardian arrived, but I must beg the Governess Club’s patience. Sir Stephen Montgomery arrived eight days ago, yet I still do not feel the situation frees me to leave.

I know it is not my place to say so, but I am worried about his ability to be an adequate guardian to the children. Since his arrival, he has shown little to no interest in the boys, unless they find themselves standing before him, which is rare. Sir Stephen spends his time either in the study, mainly with Mr. Renard, or on his horse, riding the estate. The only indications that the guardian has taken control of the household is the increase of servants and the paying of wages owed. I have already deposited my belated percentage into the joint account.

Claire, he is so remote. Stern, silent, and awkward, so unlike the guardian I expected Viscount Darrow to appoint. Wouldn’t he want someone more like himself? They had been friends since school, but I cannot see it. I have seen him laugh only once. On his first day here, he returned from a ride with a piece of the ruined bridge; it remains in the study. The following day he met with Mr. Burdis for nearly two hours. When the butler left the study, he looked as though he had withstood an interrogation at the Tower of London.

Please do not be angry with me. My intentions to come to Ridgestone remain unaltered, just the timeline in which I see myself joining you. I know Sara will understand, but I am counting on your level head to keep Louisa calm. She is bound to react poorly. Appeal to her compassion; what woman would leave children in such a situation?

I do expect this letter to reach you before you leave for your wedding trip to Scotland, so I wish you a happy and safe journey. Sir Stephen is from Scotland; did I mention that? His brogue is not very thick, but it is there, so I suspect he is from somewhere in the Lowlands. But I digress. If this letter happens to reach you after your trip, I hope you had a memorable time and either way, I look forward to hearing all about it.

With all my love,

Bonnie.
Want to read more? Return to the top of the page for order links!