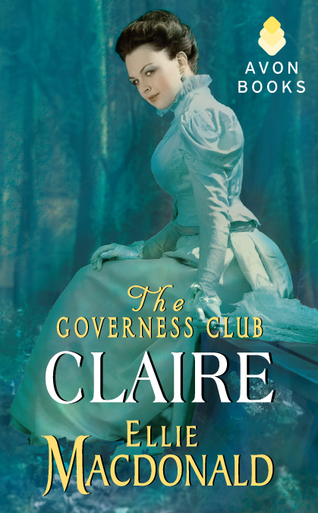 Book #1 of The Governess Club series:

Claire Bannister just wants to be a good teacher so that she and the other
ladies of the Governess Club can make enough money to leave their jobs and start
their own school in the country. But when the new sinfully handsome and utterly
distracting tutor arrives, Claire finds herself caught up in a whirlwind romance
that could change the course of her future.

Jacob Knightly has a secret.  He is actually the notorious Earl of Rimmel. He's just posing as a tutor to  escape his reputation in the city. He never expected to fall in love with the  kind and beautiful governess. She is the first person to love him for himself  and not his title.

But when Jacob's true identity is revealed, Claire  realizes she has risked her reputation and her heart on a man she doesn't truly  know. Will Jacob be able to convince her that the Wild Earl has been tamed and  that she is the true countess of his heart?


Scroll down for a teaser!

My inspiration (a.k.a who I modeled the characters after)

Mr. Knightly bowed. “Miss Bannister, it is a pleasure to make your acquaintance.”

Claire automatically curtseyed. “The feeling is mutual sir.” As she straightened, she lifted her eyes to properly survey the new man. Likely not yet thirty, Mr. Knightly wore his brown hair long enough to not be following the current fashion. Scattered locks fell across his forehead, and a darkening of a beard softened an otherwise square-jawed face. Standing nearly a head taller than herself, his loosely fitted jacket and modest cravat did nothing to conceal broad shoulders. Skimming her gaze down his body, she noticed a shirt starting to yellow with age and a plain waistcoat struggling to hide the fact that its owner was less than financially secure; even his trousers were slightly too short, revealing too much of his worn leather boots. All in all, Mr. Jacob Knightly appeared to be the epitome of a young scholar reduced to becoming a tutor.

Except for his mouth. And his eyes. Not that Claire had much experience meeting with tutors, but even she could tell that the spectacles enhanced rather than detracted from the pale blueness of his eyes. The lenses seemed to emphasize their round shape, emphasize the appreciative gleam in them before Mr. Knightly had a chance to hide it. Even when he did, the corners of his full mouth still remained turned up in a funny half-smile, all but oozing confidence and assurance, bordering on an arrogance one would not expect to find in a
tutor.

Oh dear. Claire sighed inwardly. Not only was the man handsome, but clearly, he knew it. There was little worse, in her opinion, than a man overconfident in his attractiveness. And if he were as intelligent as he was handsome, well, the arrogance may be well deserved, but still difficult to tolerate.

“You will take Mr. Knightly upstairs and show him the tutor’s room and the nursery,” Mrs. Morrison was saying. “You know the nursery best, so inform him of the schedule and expectations of the household. Prepare to introduce him to the children. I am sure his lordship would want the masters’ education to begin promptly.”

“Of course. Mr. Knightly, if you follow me.” Claire turned to leave the room, hearing Jacob step behind her. Turning toward the servants’ stairs, she stopped briefly at the kitchen door. “Mrs. Potter, this is Mr. Knightly, the new tutor. He is moving in today.”

The cook looked up but didn’t stop chopping the vegetables. “Good afternoon, Mr. Knightly. Breakfast is at half six in the morning. You will lunch and take cooked tea with the children; Miss Bannister will inform you of their schedule.”

"Yes, ma’am.” The man sounded amused. Claire continued toward the servants’ stairs as he followed her. “Where is the nursery?” Jacob’s deep voice echoed in the stairwell.

“The second floor, above the family wing and below the servants’ quarters,” Claire replied. “Your room will be next to it.”

Claire glanced back at him. “Do you have any luggage?” She glanced pointedly at his hands, empty except for a threadbare hat.

He stopped and blinked at her in confusion. “Wouldn’t a footman—oh, right.” He gave her a sheepish look. “Excuse me.” Claire stood patiently when a few moments later Jacob returned, portmanteau in hand. He grinned. “Luggage retrieved.”

She continued up the stairs. “There are five children, three girls and two boys, the twins. Masters Peter and Michael are only seven—”

“A good age to start their education,” Mr. Knightly said.

“Of course. And twins? Identical?”

“Yes. Not to worry, however. When they were born, Lord Aldgate cut a piece of Michael’s—the younger one—right lobe off to assist in telling them apart; he wanted no chance of any sort of discrepancy or deceit later in life.”

“That seems dramatic.” Mr. Jacob’s voice was beginning to sound strained, and his breaths were coming in heavier puffs.

Claire opened a door and entered the nursery. “Miss Sophie is eleven, Miss Mary is nine, and Miss Allison is four. The children sleep in the rooms across the corridor but take their meals and lessons in here.” One of the doors on the far side swung open and a maid exited, her arms full with cleaning supplies. “This is Lucy, who is assigned to the nursery; she assists with meals and cleaning and supervision. This is your room.” Claire indicated the door and stood off to the side, allowing him to enter.

Jacob lumbered past her, his face red from carrying his trunk. Placing it on the floor with a loud thump, he straightened with a groan. Catching her look, the groan cut off quickly, and he glanced around instead, turning his back to her as he rotated on the spot. Shock and disbelief began to show on his face.

“Is there something amiss with the room?” Claire asked.

“No, no, it’s just—unexpected.” Jacob moved over to the window and pushed the thin curtain aside. The view was merely a section of the roof covering a lower wing, just like hers on the other side of the wall. Inhaling deeply, he turned back toward her.

“Pray excuse me, Mr. Knightly. I must return to the children,” Claire said. “We will be having cooked tea at half five; the children will be in bed by nine. We will be able to have further discussions then.” She turned to leave.

Claire only paused to look over her shoulder. “Welcome to Aldgate Hall, Mr. Knightly.”

***
Jacob Knightly  grinned as he watched the governess leave, her hips swaying nicely in her grey muslin dress. When the butler and housekeeper had told him to meet the governess, he had expected a short, plump, middle-aged dowd of a woman, the kind that haunts every young boy’s dreams, not this brisk beauty he was presented with. True, she wasn’t like the diamonds he was used to, but when she had burst into the housekeeper’s parlor, face flushed and green eyes lit with anticipation, she had fairly radiated beauty.

His grin faded into a grimace as Jacob faced his room again. Gads, what a horrible excuse for sleeping quarters. If he spread out his arms, he was sure his fingers would touch both walls simultaneously. He tried it, just to be sure.

With a deep sigh, he flopped his arms back to his sides. At least the room was clean. Moving to the washstand, he splashed some cold water on his face to wash off the travel dust; sitting on the back of a horse cart was a dirtier mode of transport than he’d expected. Glancing into the small, warped mirror, he offered his reflection a cynical grin. If only his friends could see him now. None of them would believe that the Earl of Rimmel would voluntarily place himself in such circumstances. He barely believed it himself, but it seemed to be the best place for him, plain sight and all that; people saw what they wanted to see.

At that thought, he was reminded of his first slip-up, assuming that a footman would carry his luggage up the stairs. Jacob would have to get into the mindset of a servant if this was to have any hope of succeeding. Good thing Miss Bannister was there to bring his faux pas to his attention. The puerile part of his mind wondered what else she might instruct him on.

His thoughts back to her, Jacob threw himself onto the small bed and folded his hands behind his head. Squeaks rebounded off the wall with each movement, but he barely heard them, instead filling his head with the sight of a young, shapely governess. A speculative smile spread across his face once more as he contemplated turning every schoolboy’s fantasy about prim, proper, pretty governesses into reality.

Well, he may be in voluntary exile for the time being, but no one said he couldn’t have fun while he did it.
Want to read more? Order links at the top of the page!